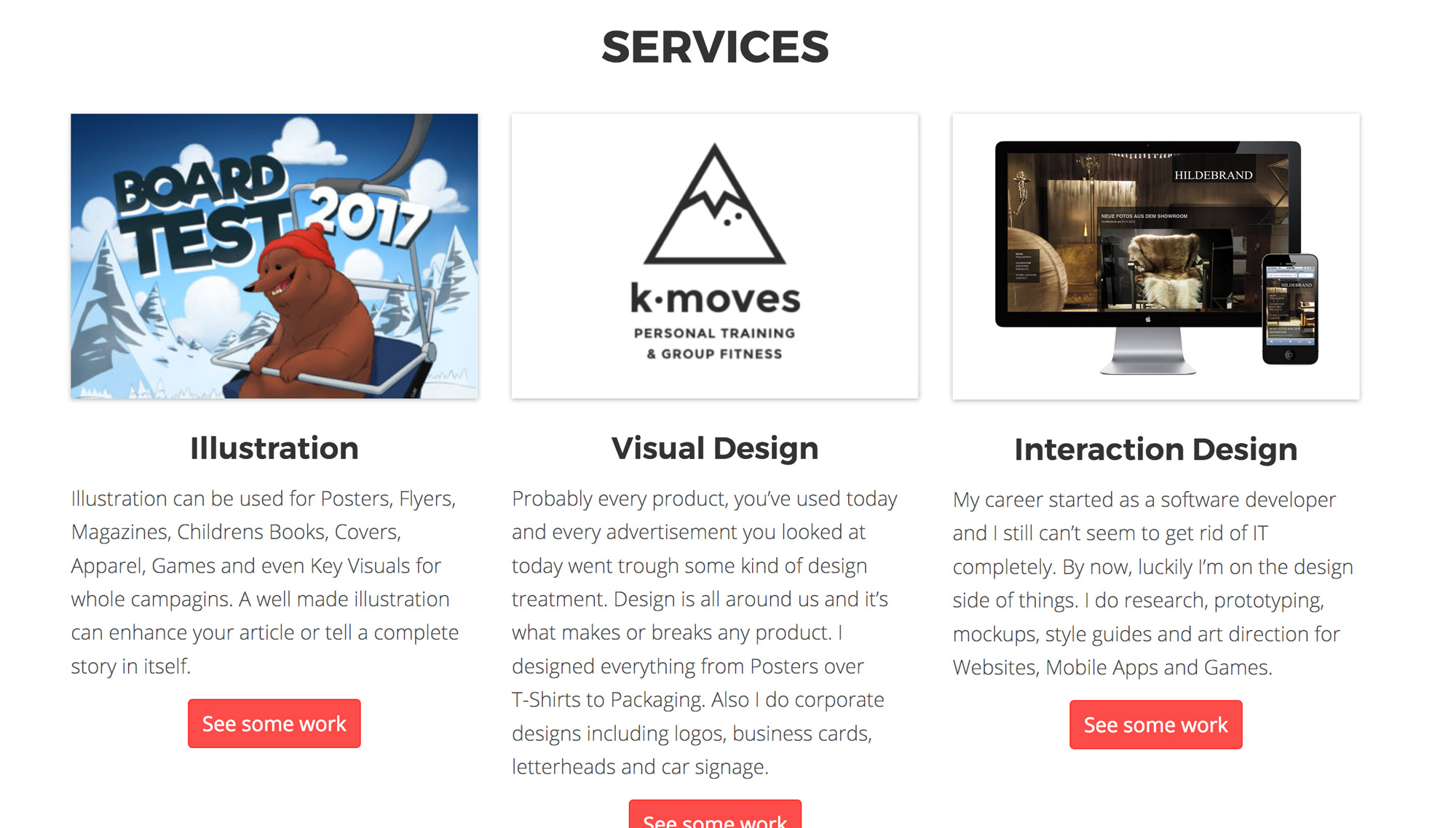 Finally the new version of this website is online. As car mechanics mostly have pretty rundown cars, a lot of people working in the digital industry have a crappy website. You spend so much working on digital products through regular jobs that you don’t want to take care of another one in your spare time. But every once in a while the planets align and you get to update your website. 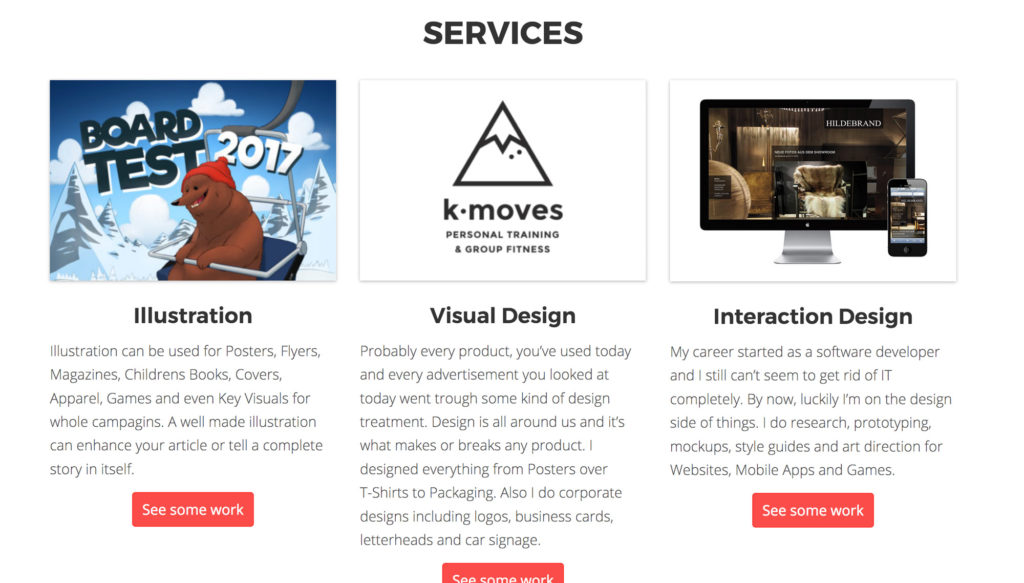 A lot of thought also went behind the Services and About section. What do I want my Business to be about? Through the last decade (just writing down the word decade made me feel rather old) I went through the transition from being a Programmer to a (self-taught) Designer in different disciplines and Companies until finally starting my own Company. Determining my professional identity exactly was no simple task, which is why I spent a lot of thinking about how to best describe my services.

I used to go with the tagline «Illustration & Graphic Design». My issue with this was, that the Graphic Design part suggests a focus in the traditional Graphic Design business. That industry went through quite some changes since the Web replaced a lot of traditional media. Clients need less traditional print communication than they used to, while a whole new industry formed around design for digital products, where Disciplines include Interaction Design and User Experience Design among a gazillion of other buzzwords. As a result, Graphic Designers who didn’t learn the skills for digital design have a hard time.

Do emphasize more on the digital side, I changed the tagline to «Illustration & Visual Design». Visual Design represent both the visual aspect of digital products as well as Graphic Design in traditional media. 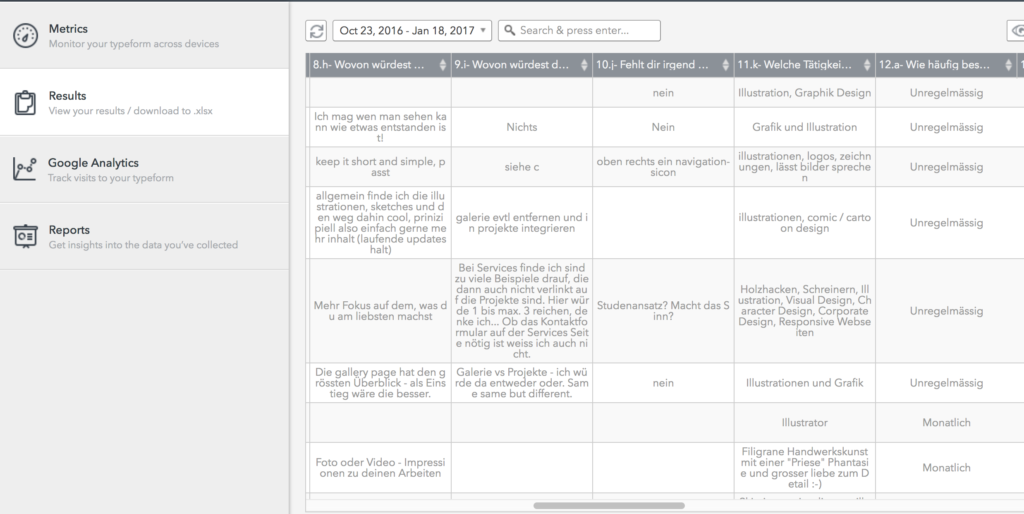 A big help was the little survey I did a while back. The feedback helped me a ton in determining what to prioritize and how to structure the content. For example, I learned that people cared way more about the story behind a project and how it was done than I would have gessed.

As with everyone who works in a creative industry, the portfolio is the most important thing for a new client or employer to determine what you’re able to do. Also it’s always a ton of work not only selecting which pieces to include, (and more importantly, which pieces to not include) but also presenting in the best way possible.

The work is split into Projects and Personal Work. This separation helps a lot in that I can just upload personal drawings and sketches in a simple manner without mixing them up with commercial work I did. 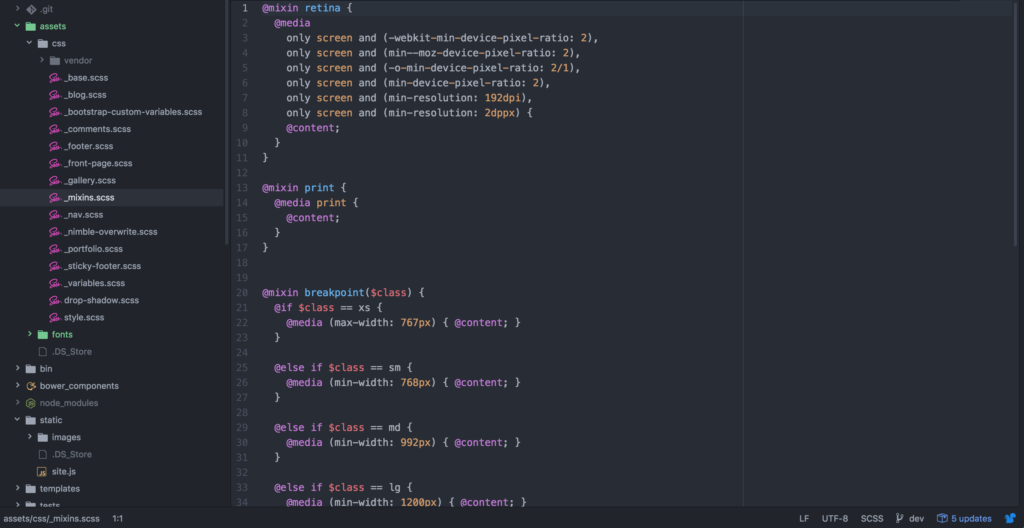 This website runs wordpress, as does over 25 % of the entire web. For anybody who cares about the technical details, I designed my own theme using Timber, which is a Plugin to use the Templating-Language Twig in WordPress-Themes. In more simpler terms, it’s just a way to write your WordPress-Theme a lot clearer and reduce the amount of headaches doing it significantly. You still need to write HTML and CSS yourself but you can do so with very little knowledge about WordPress or even PHP.

I used the Timber Starter Theme as a base, which is a very good starting point for Timber. A gulp setup including browsersync sped up things like finetuning the Theme a lot. I even managed to get Webfonts for Open Sans and FontAwesome as npm-packages and get it to compile into the target directory, which sounds easy but was ridiculously difficult at first. Bootstrap was a great boilerplate for standard design elements and the responsive menu, and using the SASS-version with custom variables made sure I could keep messy overwrites to a minimum.

And of course using git with a (free) BitBucket Account made sure I could not only revert back after messing up something but also that pushing changes to the live Site (the one you are reading right now) way easier.

As with all the things that you build yourself instead of picking from the shelve, I learned a ton and even had a little bit of fun.

Since this is just another iteration of a product, I need to get feedback in order to improve it. What do you think of the new website? Is it better than the old one? Is something missing? Let me know in the comments.